Join us at the Family Parish Retreat at Kanuga February 24 - 26!

“I want you woven into a tapestry of love, in touch with everything there is to know of God.” Col 2:2

Let our Christ Church family come back together at Kanuga for a weekend you won’t forget! Christ Church members will travel to Kanuga, an Episcopal conference center in Hendersonville, North Carolina for a wonderful winter weekend in the Blue Ridge Mountains. While the programs will have a spiritual focus, there is lots of recreation and fun led by our clergy, staff, and members of the Parish Retreat Planning Committee. We hope you can join us for a weekend of fellowship, rejuvenation, and prayer in the mountains.

The weekend begins with arrivals Friday afternoon, followed by supper and fellowship in the Fireplace Lounge. Saturday is full of programs and activities for all ages, and on Saturday night fun will be had by all with family-friendly entertainment. During adult programming, our youngest parishioners will be cared for by our nursery caretakers in a safe, warm, and loving environment. Programs and activities will be planned exclusively for youth as well! The weekend ends with Holy Eucharist Sunday morning in the Chapel of Transfiguration before returning home.

You may request specific cabin mates, roommates, or a single room when you register. For accommodation information, please review the Kanuga lodging website and campus map. Lodgings include The Inn’s hotel-style rooms, historic, rustic cottages, and guest houses.

Rates: Includes 2 nights in on-campus lodging plus all meals: 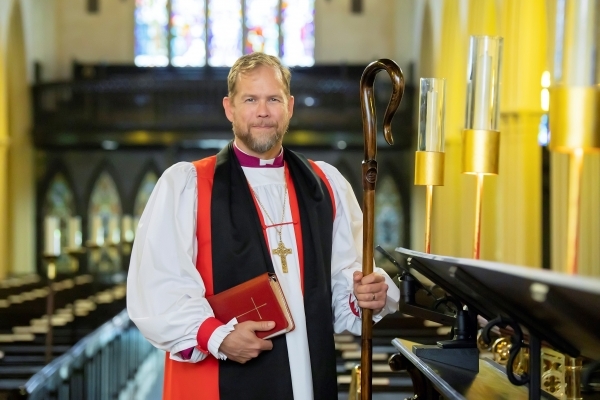 See Bishop Richards' video greeting to the Diocese during our Bishop search, 2021.

On September 25, 2021, Daniel Paul Richards was elected to serve as the ninth bishop of the Episcopal Diocese of Upper South Carolina. He was elected while rector of Christ Church of the Ascension, parish and day school, in Paradise Valley, Arizona, and chaplain of the Phoenix Fire Department. He is an experienced minister of the gospel and leader in the church. Daniel is married to Amy Rose Richards of West Bloomfield, Michigan, and they have three children, Rachel Richards, Jolie Richards, and Henri Richards.

Daniel left the Southern Baptist Church soon after and was hired by the Episcopal Diocese of Arizona as the youth and young adult coordinator for the diocese in 1997, the same year he was confirmed as an Episcopalian. He attended the Church Divinity School of the Pacific in Berkeley, California, and graduate in 2003. He was ordained to the Sacred Order of Deacons on May 25, 2003, and to the Order of Priests on December 3rd of the same year.

He served at Saint Michael and All Angels, Tucson, Arizona as curate before serving as curate of the Church of the Holy Spirit in Phoenix for four years. During this time, he served on the Commission on Ministry for the Diocese of Arizona and served annually as the spiritual director for high school at Chapel Rock Camp and Conference Center.

Daniel accepted a call to Grace Episcopal Church in Traverse City, Michigan in 2009 and served there until 2015, as both rector of the parish and appointed dean of the Grand Traverse Deanery from 2010 to 2015. He served on the bishop nominating committee for the ninth bishop of Western Michigan and local interdenominational and inter-religious boards. The parish was marked by its long standing commitment to homeless and underserved outreach and its Jubilee Outreach Ministries.

In 2015 Daniel returned to Arizona to serve as rector of Christ Church of the Ascension, Paradise Valley, eventually being elected to lead the East Phoenix Deanery and serving as president of the board of Chapel Rock Camp and Conference Center in Prescott. He volunteered as chaplain for the Phoenix Fire Department from 2018 to 2021. His spiritual life is marked by a commitment to Benedictine discipline and time in the wilderness.